Nearly one-quarter of all Americans avoid dentists because they’re afraid, according to American Dental Association surveys. And the fear comes in many forms.

There’s fear of pain, fear of needles, fear of drills, fear of blood, fear of gagging, fear of feeling helpless or having personal space violated, fear of being lectured for not brushing or flossing adequately and fear of being admonished for staying away so long.

“I even hate that sucky thing that vacuums up your saliva,” says Carolyn Moody, a Bridgewater, N.J., mother of three who avoided dentists for 10 years. Now she makes sure to bring her iPod. “As soon as I hear that drill, even from another room, my fists clench, my body stiffens and my heart starts pounding,” she adds. 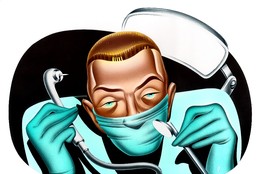 Sedation. From nitrous oxide (laughing gas) to tranquillizer pills to intravenous drugs, patients now have many options to lessen their awareness of what’s going on in the dentist’s chair. Dentists must have special training and certification to give some forms of sedation, and patients must be accompanied to and from the dentist’s office.

Pain killers. Numbing sprays, gels and patches can make cleanings less arduous and reduce the pain of injections. Local anesthesia can sometimes be delivered with electricity from outside the mouth, or with computer-controlled devices that regulate the flow of anesthetic.

Atmospherics. Quieter drills and citrus-scented candles help mask the typical sounds and smells of dentistry; some practices have stopped using eugenol, the clove-scented antiseptic; others even bake cookies to introduce a soothing aroma.

Now, many dentists are taking pains to win frightened patients back. Some practices let patients virtually sleep through the procedure. Others focus on maximizing soothing distractions while minimizing pain as well as the typical sounds and smells of dentistry that can trigger unpleasant memories.

“You can’t just say, ‘Open up—you have nothing to fear,’ ” says psychologist Hillary Broder, who teaches the course. “You have to establish a rapport and find out what makes them anxious and reassure them that that’s not going to happen.”

“There is usually something that triggers that phobia, like a bad experience when they were a child,” says David Hershkowitz, associate chairman of the school’s department of Cariology and Comprehensive Care. He tells students, “Once you know the trigger point, you can do away with the fear.”

To be sure, not all dentists want to treat anxious patients. “There’s a fair number of dentists who are more phobic of the phobic patients than the phobic patients are of dentistry. They’re difficult to work on and you can’t work at your normal pace says George Kivowitz who has dental practices in New York City and Newtown, Pa. But he finds that kindness and communication can go a long way toward calming patients. “I promise that if I see an area of decay, I don’t have to prove it to you by peeling you off the ceiling.”

Other dentists aren’t eager to work with anxious patients, others have built their practices around treating them. “I have some who go into a full-blown panic attack, shaking uncontrollably, when I merely look in their mouths with a mirror. That’s my flock,” says Manhattan dentist Louis Siegelman.

For some such patients, being asleep or close to it may be the only way to endure dental procedures—even routine cleanings. “You have to meet the patients where they are,” says Dr. Siegelman.

The mildest and most common form of sedation, nitrous oxide—or “laughing gas”—has been used in dentistry since the frontier days and is still considered effective for reducing pain and relieving anxiety. About 35% of dentists offer it. But some patients can’t tolerate wearing a mask over their nose during the dental work, and in rare cases, it can make people more jittery and anxious instead of less.

Oral conscious sedation, in which patients take a tranquillizer such as Halcion or Versed before the visit, puts them into a relaxed and sleepy state although they can still respond to the dentist’s commands. Patients may have little memory of the dental work, but are so groggy they must be accompanied to and from the dentist’s office.

Intravenous sedation gives patients an even greater feeling of being “out,” and can be very useful for extensive gum or implant surgery. It also works quickly and can be increased or counteracted quickly, if necessary. But it does require a needle. The patient’s heart rate, blood pressure and oxygen intake must be monitored in case of cardiac arrest or other problems. And the dentist needs additional training and certification as well as higher malpractice insurance to cover the added risk. General anesthesia, in which the patient is unconscious and unable to respond to commands, is mainly used for oral surgery. That requires even more specialized training.

Costs of sedation, which range from about $50 for nitrous oxide to $350 for IV drugs, are rarely covered by insurance. But some dentists throw it in for free if a patient is having extensive work. Anxious patients often need considerable dental repairs, particularly if they’ve been fugitives from dentistry for years, and many opt to have it all done at once while they are under sedation.

New techniques and tools have made many aspects of dentistry less off-putting than they used to be.

Some dentists and hygienists offer lidocaine spray, gel or patches to numb patients’ teeth and gums even for routine cleanings. Many also wear magnifying loupes that allow them to give patients more personal space. “We can stand about 18 inches away now, rather than six or 12 inches,” says Dr. Hershkowitz.

Electric drills are quieter than older models that were driven by compressed air. In some cases, ultra-quiet lasers can be used instead of drills, but they have many limitations and don’t eliminate the need for anesthesia.

Devices that emit low-dose electrical pulses to block pain pathways right through the skin can be used in place of anesthesia for some procedures.

Unfortunately for the needle phobic, much dental work still requires an injection of local anesthetic—but there, too, there are innovations. For one thing, dental needles used to be sterilized and re-used, getting blunter and more painful to inject each time. Now, needles are used only once.

Numbing gel can also minimize the pain of the stick, but what hurts most about dental injections is the pressure of 1.7 milliliters of fluid pushing into dense tissue. One computerized device called The Wand controls the flow, volume and pressure of the injection and looks more like a pen than a needle. Dr. Kivowitz says that manually delivering an injection very slowly can minimize pain just as well. “Do they ever love it? No,” he says. “But if they understand what you’re doing, it helps a lot.”

He also notes that many anesthetics contain adrenaline, which makes them last longer but can send a patient’s heart racing and trigger panic attacks. It pays to warn patients of the possibility in advance, he says: “Any unexpected thing that happens in the chair just adds to the phobia.”

Taking a cue from pediatric practices, some dentists offer an array of entertainment options to keep patients’ minds off the drilling and filling, from flat-screen TVs to headphones to virtual-reality goggles for watching 3-D movies.

“Mondays and Wednesdays are ‘spa-days.’ We’re very busy then,” says dentist Eda Ellis at Central Park Dental Spa in New York, which also has a waterfall and aromatherapy candles in the waiting room. “Patients love it. THey say, ‘Wait, it’s over so fast?’ ” she says.

What can patients do themselves to alleviate their anxiety? Bring your own distractions—a riveting book, a music player full of transporting tunes or favorite movies if your dentist is equipped to play them.

“Some of my patients have done yoga and they are somewhere else in their minds while I’m working,” says Dr. Hershkowitz who has a private practice in Stony Brook, N.Y.

Behavioral psychotherapists can teach ways to overcome anxiety. Some people find that hypnosis helps them relax, and some hypnotherapists can provide sessions by phone before dental visits.

Don’t try to self-medicate. Drinking alcohol before a dental visit is an especially bad idea. An over-the-counter pain reliever may take the edge off pain, but some forms increase bleeding. Be sure to tell the dentist about any medications you are taking.

Tell the dentist and the staff about your fears. And shop around until you find a practice that is empathetic.

In the meantime, take very good care of your teeth and gums. The healthier they are, the more pleasant every dental visit will be.

—Take a video visit to a New York dental spa, at WSJ.com/Health.

Write to Melinda Beck at HealthJournal@wsj.com

For close to three decades, Dr. Alice Cash has devoted her professional life to the promotion of music for healing. Dr. Cash combines her Masters in Social Work with her PhD in Musicology to educate people in the art and science of music’s unique properties.In 1996, Dr. Cash launched Healing Music Enterprises as a vehicle to offer her expertise to health care professionals, educators, students, organizations and people at large. In 2005, Surgical Serenity Solutions was born and is providing the ideal soothing music for surgical patients through pre-loaded, cordless headphones. Her services are in high demand across North America and more recently, at an international level.Dr. Cash grounds her seminars, workshops, clinical and private practice work in well-established research and theory.
View all posts by Dr. Alice Cash →

One Response to Fear of the Dentist: How much could music headphones help?

This site uses Akismet to reduce spam. Learn how your comment data is processed.